So obviously there are about 30,000 other reasons that we won, but I think the 30,001st might be how healthy we stayed this season.  I know we discussed this a little earlier in the season, but I feel like it's worth a mention now.

Just to warn you, this is highly unscientific.  Here is the list, in order, of how many players each ML team put on the DL (either the 15-day or the 60-day) this season.  I realize that this doesn't take into account how important the players were who got injured, how long they were out for, how much of a difference the injury made in their game while back on the field, and a lot of other stuff that is likely very important in analyzing this correctly.  BUT, I do think that it does a good job of representing how well this team stayed on the field.  I don't know how much I believe in chemistry or any of that stuff, but I do think that consistently having your best players in the game has got to help somewhere along the line.

I don't know exactly what I'm trying to say, here.  Mostly, I just think that it's really important that we all thank the baseball injury Gods every night for not throwing very many lightning bolts at our guys this year.  Unlikely that we'll be so fortunate in the future.  Go Phils! 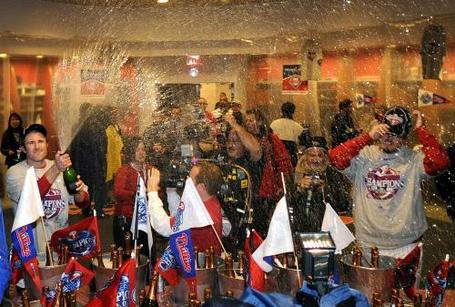