It was about the 4th inning last night when Whole Camels went to the bullpen and once again waved to the righthander to do the next three weekdays' worth of Breakfast Links. And of course I was so wired that I was up until 2 a.m. Bottom lines: Add linkys where you may; I'll just get the party started. 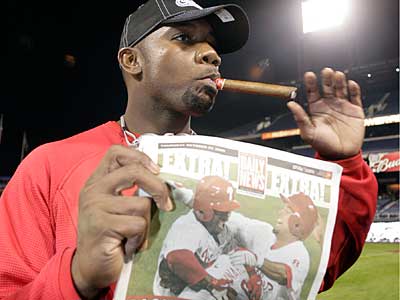 Back for Seconds: Phillies in Fall Classic. Todd Zolecki tells you everything you need to know in the lede, and makes me suspect that he either checks out our game threads, or that maybe Jayson Werth just has a fondness for beer and cigars.

Jayson Werth held a cigar in one hand and a beer in the other as he soaked in the champagne that had been poured on him and the atmosphere that had surrounded him as the Phillies celebrated their second consecutive trip to the World Series on Wednesday night at Citizens Bank Park.

They're nothing quite like last night, but the booth calls of the clinching out are also on this page. Andy Martino's game story is here.

Lots of interesting NLCS records. Perhaps like me, you heard so much about Ryan Howard's consecutive RBI streak, but did you know about Chase Utley's? And here I thought Chooch was a postseason OBP monster.

Don't miss some great pictures of Werth here--the look-in to the dugout shot after his 3-run HR and Pedro Martinez pouring champagne in his mouth are two of my faves (don't worry jonk, neither one is the best Werth picture ever).

Phillies fans celebrate a night of good karma. Just in case you're out of town and were wondering how ugly and angry things got after the pennant clinch. Turns out: Not so much.

Bill Lyon: Savoring a night of triumph. He's right. This comes along like, well, never. Jayson Stark gives the context.

Bill Conlin: Manuel's champs have it all over Green's. Who but Bill Conlin had the pre-loaded lede that last night was the 29th anniversary of the 1980 win? And Oh By The Way, he was right about Manuel all along. I hope there's no lasting damage to Charlie Manuel after the pregame hug of Dallas Green.

Paul Hagen: Tipping or not, Phillies starter Hamels still struggles. Speaking of therapy, recall that not all was sweetness and light last night. Any tips for Cole Hamels? Seabiscuit in the 4th? Plastics?

Dodgers pitchers fall short in clutch situations. You know, that's what she said! Meanwhile, over at the L.A. Times, do I detect some West Coast bile? Careful, L.A.--thinking like this might give you an edge.

Shane Victorino is not universally loved, but for his eerie power to slay Dodgers. I know, it's a shock. Fun post from McCovey Chronicles.

Down 3-1 in ALCS, Angels try to stay positive. No way I could miss this link. If only there were some cheesy way I could help.