Better to be lucky...

Share All sharing options for: Better to be lucky...

...than good.  That is what somebody's mama always says, somewhere.

Burnett sure seemed like a beast last night.  Unhittable to say the least.  Sometimes perception matches up with reality; Burnett was unhittable.  The problem is that he was walkable and the Phillies got screwed there.  Burnett knew what he was getting and was Tom Glavine about it.  He knew he didn't have to throw one pitch down the middle of the plate and he didn't.  Fair or not, I'll post and you'll decide. 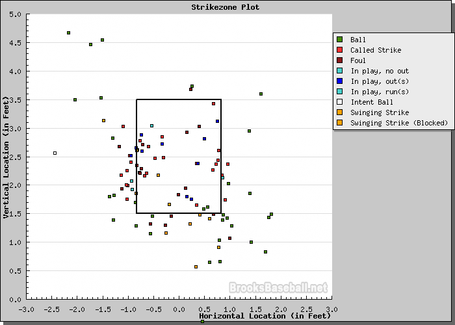 Not one pitch down the middle.  Pretty amazing.  But when you are given every call on the outside, why the heck would you throw the ball down the middle?  8 pitches on the outside and 2 on the inside tell the whole story.  When he wasn't getting those calls, the Phils were flailing at thos pitches grounding out weakly.  What is telling to me is that he got MORE called strikes outside the edge of the plate than he did on the inside on the left side of the plate (in the graph).  8 outside the zone, 6 inside the zone.  I would be a bit happier if those numbers were reversed, but that is a terrible strikezone.  The problem is that those pitches are unhittable but were kinda close, so nobody really notices.

Compare that to Pedro, who was SICK (in all senses of the word)! 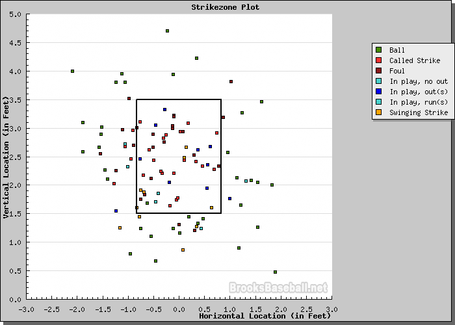 He got 4 outside calls, one pretty darn close too, but look at all those called strikes IN the zone.  He didn't have to try to extend the zone out a bit, he was dropping everything inside the zone and the hitters couldn't do anything with it.  Don't let the game results fool you, Pedro was dominant and Burnett, while certainly hitting his spots, was given an extra-wide plate by the ump.

I don't normally rail on the umps.  I was fine with Howard's play since it was inconclusive in slow-motion replay (how can you expect an ump to go either way on that) and I am not really even that angry about Utley's DP (really it shouldn't have been close to make it questionable).  I do care about a wide strikezone with a good pitcher on the mound.  It's tough enough to hit the ball squarely when it is down the middle of the plate, now you have to try to hit it when it is a ball.