The 2009 World Series: The Boring One

Share All sharing options for: The 2009 World Series: The Boring One

We're now on our second day post-World Series, and I can't fight off this nagging feeling that the championship series I just watched was, well, pretty damn boring.

Yes, it was a World Series, and with the Phillies' long record of futility, there's really no ground for complaining when the team just makes it to the post-season, let alone to the World Series.  But, in the context of a best-of-7 match for the best team in baseball, it's hard to say that this Series had much going for it.

Sure, this was the first World Series to go past 6 games since 2003.  And the Yankees won their first championship in their new stadium.  And Chase Utley tied the record for most home runs in a World Series.  And Hideki Matsui was dominant.  And Mariano Rivera was, well, Mariano Rivera.  But all of those things added in with the rest of the Series just didn't add up to anything exciting or memorable.

The best way to capture this sentiment is the following:  over the course of the six games, there were 2 lead changes.  That's it.  Even worse is that both of them occurred in drabs over the course of the middle innings.  Otherwise, once a team took the lead in this series, the other team never got ahead.  Of course, this doesn't mean that it wasn't good baseball, but it does mean that from a fan's perspective, this isn't particularly exciting baseball.

The overall series momentum also didn't provide much excitement.  The Phillies took the early 1-0 lead, but then the Yankees won 3 in a row.  Had the Phillies won their second in Game 4 instead of Game 5, the Series would have taken on a new level of excitement.  But, that's not what happened, and by the time the Phillies had 2 wins, the Yankees were heading home looking for one to clinch.  Momentum really didn't shift, and the Series ended as it seemed it would without any real surprise.

Looking at the particulars of each game confirms this, as only Game 4 had much real excitement.  Yet, even that excitement lasted only a very short period of time.  Here are each of the games re-capped, along with the mostly uni-directional win probability graphs.  I've also given each game an excitement ranking on a 1 to 10 scale, with 10 being Joe-Carter-Game-6-in-1993 exciting and 1 being a mid-August Pirates/Padres 6-2 snooze-fest:

Game 1:  Cliff Lee dominated the Yankees, holding them to one unearned run.  That's a wonderful pitching performance, but it's not high drama.  Chase Utley's two home runs against CC Sabathia were exciting, but the rest of the offense was dormant until the last two innings.  And, at that point, the game was pretty much over.  The Yankees had no chance against Lee, and the graph below shows it.  The only thing going for the game on the excitement meter was that it was Game 1, which seemed like a big deal at the time.  Excitement factor: 6. 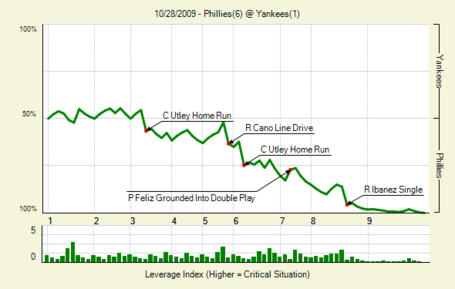 Game 2:  One of our two lead-change games, the Phillies took an early lead, but then Pedro Martinez slowly gave it back, one run at a time, until the Yankees had a lead that Mariano Rivera protected with a 2 inning save.  The lead change was exciting, as was some good pitching from Martinez and A.J. Burnett, but the drip-drip run-scoring from the Yankees along with the certitude of the Rivera save worked against this game having much excitement to it.  The steady incline of the win probably graph confirms this.  Excitement factor: 4. 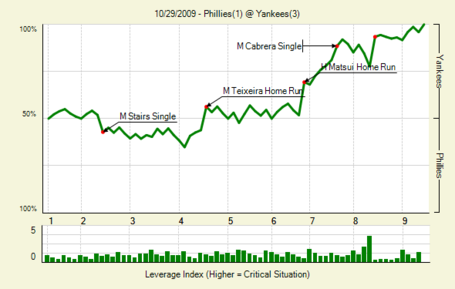 Game 3:  Here we get out second, and last, lead change of the Series.  The Phillies took an early 3-0 lead behind a dominant Cole Hamels.  But then it all fell apart in the middle innings, as the Yankees outscored the Phillies 8-1 over the course of innings 4 through 8.  The Phillies' feeble comeback just assured another Rivera shut-down appearance in the ninth.  This game was over in the fifth, and the entire stadium knew it (and the graph confirms).  Excitement factor:  3. 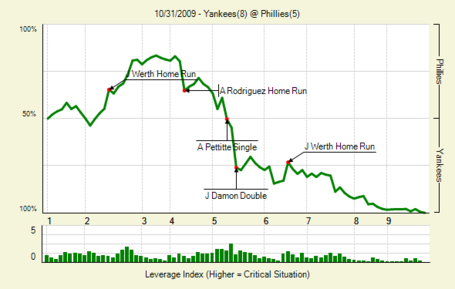 Game 4:  This was the only high-drama game of the Series.  The Phillies staged a late inning comeback against Sabathia and Joba Chamberlain, who looked great in the eighth inning until Pedro Feliz shockingly tied the game with a home run.  Brad Lidge entered the ninth and looked great as well, but followed Chamberlain's pattern of not being able to put away the last batter.  Lidge allowed 3 in the ninth, and another Rivera appearance assured the Yankees' third win.  This is the only win probably graph with much of a jagged edge.  Excitement factor: 8. 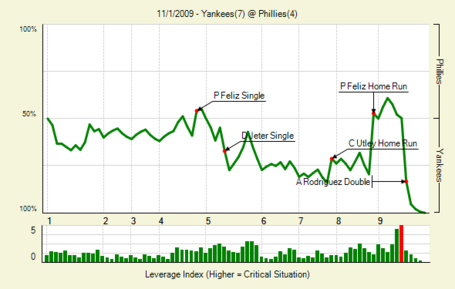 Game 5:  This game was over early, as the Phillies took a big lead with Cliff Lee pitching.  He wasn't as sharp as Game 1, but he was pitching well enough and the offense put up enough runs that the game was not much in doubt.  The Yankees did mount a bit of a comeback and made the ninth inning tense, but it was too little, too late.  That ninth inning comeback rescues this game from a 1, as the virtually flatlined win probably graph would seem to merit.  Excitement factor: 4. 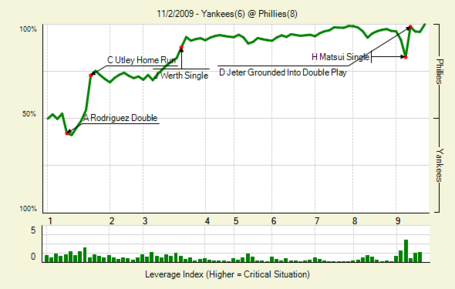 Game 6:  This was the worst of the bunch.  The only thing it had going for it was that it was Hideki Matsui's 6 RBI and that it was the last game.  Otherwise, the Yankees took an early lead, the Phillies' hitters couldn't hit with men on, and everyone knew Rivera was going to come in for more than 3 outs, possibly 6.  He ultimately came in for 5 outs and closed the door to finish the Series, as we all knew he would.  The graph below merits a 1 on the excitement scale, but the championship win boosts this game, but only slightly as it was a complete bore.  Excitement factor: 2. 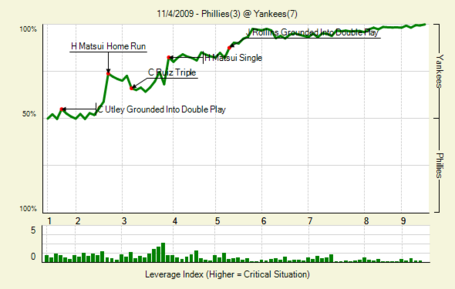 The average excitement factor here is 4.5 on a 10 point scale.  Of course, this is an arbitrary and subjective scale, but take a look at the fangraphs collectively and note the extreme absence of much fluctuation at all.  There's no two ways about it: this was a boring series.

Of course, I'd feel completely different had the Phillies won it all . . . .