Connected with the Phillies

Chan Ho Park is still gunning for the rotation. 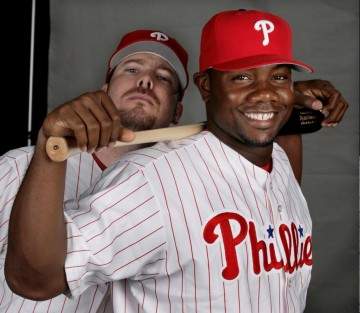 Just look at it.  There are so many layers of meaning.  We'll be discussing this for decades.

They're handling Cole Hamels with kid gloves.  I fully agree with this.  He's proven he can pitch, now it's just a matter of keeping him healthy.

Stairs rips one into the night, waaaay out of here.

Rule 5'er Bobby Mosebach looking for a spot in the bullpen.

Pat the Bat the Ray.  It still hurts.

I bet he hurts even more...

Chad Durbin has settled nicely into the reliever's role.

Beerleaguer wants Chase Utley to duck and weave.  On the whole I agree, but it's hard to ignore the value that all the HBP brings to the team.  Maybe if he's less sore he'd hit better, if that's even possible...

Via The 700 Level, Jimmy takes photos.  A true renaissance man.