The Paulino Trade - What It Means

Share All sharing options for: The Paulino Trade - What It Means

Well, that didn't last long... as we dropped last night, the Phillies traded recently-acquiring backup catcher Ronny Paulino to the San Francisco Giants for lefty reliever (Special Agent) Jack Taschner.  (Paulino was subsequently dealt to Florida for another pitcher.  LOL Ronny).  Both players had very poor springs, so both teams might see this as a "change of scenery" deal.  For what it's worth, Taschner has shown a glimmer of ability as a LOOGY, so maybe they're hoping Dubee can work some magic like he did with Chad Durbin and Clay Condrey.

More importantly, the trade tips two major roster decisions that the Phillies have made:

1. Chris Coste will definitely be the backup catcher, at least at the start of the season.  The Phillies also probably see him as a valuable right-handed bench bat, even if that bat is overrated.

2.  The path is clear for Lou Marson.  If there's one place the Phillies have depth in the minor leagues, it's the catching position.  Paulino was only going to be a barrier to Marson's development.  If either Ruiz or Coste succumb to injury, it's Marson's time.

I for one welcome our Lemur-Looking overlord. 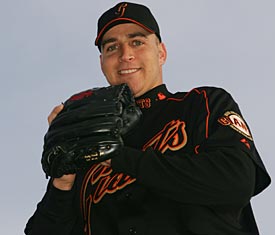