I had this game summary half-written in my head before the beginning of the 7th inning.  More terrible starting pitching, another awful April start, questioning the Phillies' decision to name Chan Ho Park to the rotation...

Not that those aren't still valid points.  Yes, the Phillies fell behind 4-0 after the first inning, then 5-1, then clawed their way back with more timely hits and another terrific performance from the bullpen.  Until the 7th, when Chase Utley connected for a wall scraping home run that tied the game at five, and pinch hitter Matt Stairs reminded us of his Game Four NLCS bomb with a nearly identical shot in the 9th to put the Phillies up for good, 7-5.

The tone of this season so far has been poor early inning performances on the mound and at the plate, and brilliant rallies late off opponents' bullpens.  This team could very, very easily be 1-5 right now... but there by the grace of God, they sit at 3-3, heading to D.C. for a three game set with the winless Nationals. 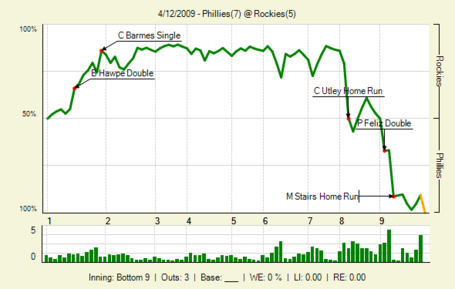 PLAYER OF THE GAME: Chase Utley, 2 for 3 with three runs scored, and the above mentioned game-tying homer.