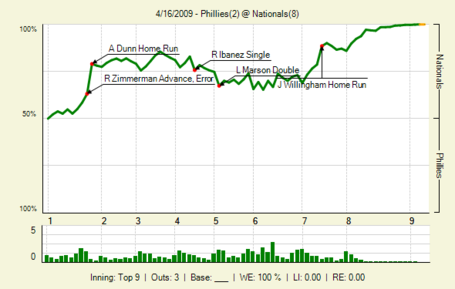 Look at it this way: At least the completely predictable Jack Taschner implosion occurred when they were already down a few runs.  Imagine if he blew a lead.

The WPA graph pretty much tells the tale of the game: The Phillies hung in and kept it competitive until the Willingham homer, at which point the Nats basically had it in the bag.

The Phillies fall to 4-4, while the Nats finally enter the win column at 1-7.

PLAYER OF THE GAME: Jack Taschner.  Two home runs, four runs allowed in one inning of work.  You have to applaud that.

The Phillies head back to Philadelphia where they'll play host to a weekend's worth of commemorative festivities for the great Harry Kalas.