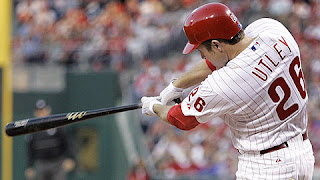 Hamels allowed eight hits, five runs, one walk, and three home runs that day on the honoring of the great announcer, Harry Kalas. Hamels did not play pretty good. He played worse than good. Worse than worse. Horrible!

The Phillies did have the game but blew the lead. They had a two-run lead in the eighth inning but couldn't hold it with Ryan Madson allowing three scores.

Greg Dobbs came in with the tying run and the inning ended with Ryan Howard up to walk the plank. The Phillies did mess up Padres' Chris Young. He allowed seven runs in almost four innings!

Chase Utley started out with a three-run home run in the first inning. The Phillies came back in third, including a triple by Raul Ibanez and a run scored in the fourth.

Hamels had allowed 11 hits in pretty much three innings in his debut on Friday versus the Rockies, who made it to the World Series a couple of years ago. He did improve from 85-86 miles-per-hour to 89-90 miles-per-hour.

But it couldn't hold a win in the ballpark. Let's hope they come back strong. Don't give up hope like Cody Swartz said. Got 150 games to go, they can improve, easily.

Just don't give up hope. If you do, nothing can be satisfied.