An enjoyable game, if not particularly tense, last night the Phillies battered the Milwaukee Brewers by a score of 11-4 in a game interrupted by a thunderstorm and a 78 minute rain delay that gave some of us time to clean our kitchens and put dishes away.  So it was good for something. 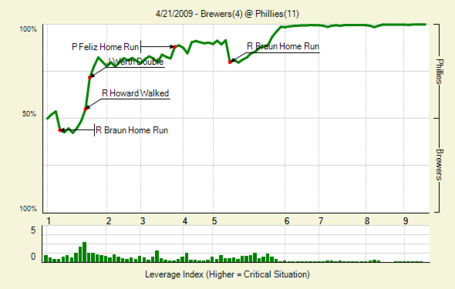 The big moments for the offense last night were Jayson Werth's first inning bases loaded double, and Jamie Moyer's fifth inning two out walk, which enabled the Phillies to stage a five run rally that pretty much put the game to bed.

Moyer was solid, if unspectacular, against a team that has historically had his lunch, so it's not all bad, really.  No "quality start," if you care about that kind of thing, but the lefty did walk away with his second victory of the season.

The story of the night on the Milwaukee side of the field was Ryan Braun, who had a monster night and constituted almost all of the Brewers' offense, going 5-for-5 with two home runs, including a tremendous fifth inning blast off the face of the second deck in left field.

PLAYER OF THE GAME: Pedro Feliz, who connected for his first home run of the season, had three hits, knocked in three, and made a couple nice plays at third.  Attaboy, Pedro.