Share All sharing options for: The Bleeding: Brewers 3, Phillies 1.

Some losses are quick and relatively painless -- you're clearly outclassed, for whatever reason, right from the outset.  In other losses, you die slowly, nothing you do seems to work, your best efforts fail, and you go home empty.  Last night's game was one of the latter.

The immortal Braden Looper (who I was shocked to learn is 34 years old) stymied the Phillies all night, who hit some balls hard, but right at the Milwaukee fielders.  Joe Blanton pitched well, for the most part, but a solo home run from J.J. Hardy and a two run double from Mike Cameron were all the Brewers needed to finish off the Phils.

For their part, the Phillies did rally in the ninth, with a solo homer by Jayson Werth and a single by Matt Stairs, bringing the tying run to the plate in the form of pinch-hitter and slider-speed bat Chris Coste, who struck out to end the game.  There's probably something wrong when Eric Bruntlett and Chris Coste are your right-handed bats off the bench, but what do I know? 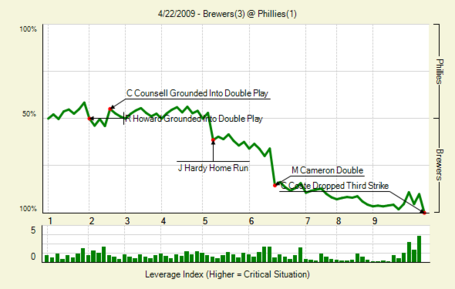