This is thrilling past the point of coherent thought.

After coughing up three more first inning runs on yet another first inning homer, the Phillies pitching staff, including a bulldog Brett Myers kept the Marlins off the board the rest of the way.  It appeared to be little more than a moral victory when the ninth inning started.

After Ryan Howard grounded out to lead off the ninth, the Marlins had a 98.5% probability of victory, so sez Fangraphs. 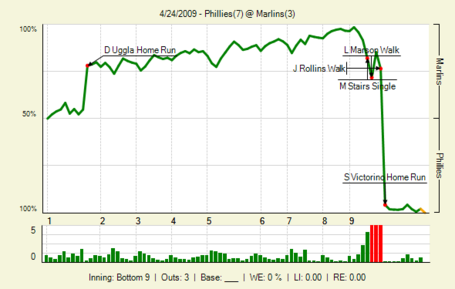 And then, well, all hell broke loose.  Soon-to-be former Marlins closer Matt Lindstrom just imploded.  Werth hit a double, Ibanez walked, and pinch-hitting demi-god Matt Stairs came through with a two strike RBI single for the Phillies first run.  Walks to Marson and Rollins, with a Bruntlett strikeout in between, set the stage for Grand Slam Enthusiast Shane Victorino....

And a followup solo shot from Chase Utley made the score 7-3, a lead which held up, as Ryan Madson held on for a somewhat shaky ninth inning to close out the victory.

I need a cigarette.