The Dirty: Cole Hamels, who injured his ankle attempting to field a bunt in the fifth inning.  X-rays are negative, and at this time the injury is described as an ankle sprain.  We should know more tomorrow.  But obviously this is important to the Phillies' hopes to repeat as Champs.

Also dirty: Another home run surrendered, a mammoth shot by Adam Dunn off Chad Durbin.  For their only run.

After two nights with 13 runs scored, the Phillies put a lucky 7 on the board versus the Nationals, with all seven runs coming off homers -- two by Utley, including a revenge shot off John Lannan, a three run bomb from Feliz, and a solo jack from Ibanez.

Cole Hamels pitched very well through four, before allowing a leadoff baserunner in the fifth.  And, well, then there was the bunt attempt, and the ankle injury... 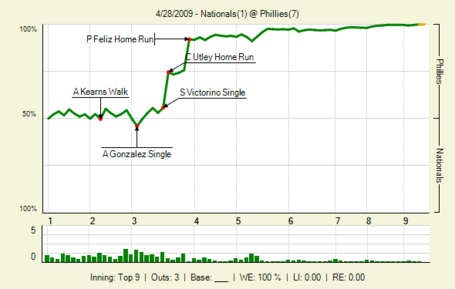 The Phillies go for the sweep tomorrow behind Brett Myers, and against Sweet Boy Scott Olsen.

Song of the Night: "Hurt" (for Cole Hamels)