I started planning this entry just hours after Brad Lidge threw the slider that Eric Hinske missed, but I only started writing it yesterday.  My favorite day of the year is Baseball Opening Day, but this one has a special meaning to me as the Phillies are Defending World Champions.  Each year, Opening Day puts something back into my life that had been taken months beforehand, and reminds me that it is a small miracle that I made it so long without baseball.  Every Opening Day is a new beginning.  All the slates are wiped clean.  Every pitcher has a Cy Young season in him, and every hitter can be the MVP.  The odds may always favor one player or another, but the moment the first pitch is thrown, we all finally get to start finding out.  It has been a few years since the Phillies have won on Opening Day, but going to the stadium, ready to be 1-0 on the year-- 100% winning percentage!-- is simply exciting.  This is when the season starts to unravel, and Opening Day is a day of infinite possibility.

I can hardly imagine that I am alone in this sentiment about Opening Day.  It is a day of promise for each and every team, and it is many baseball fans' favorite day of the year.  However, this year is a different feeling.  One nagging feeling that always seeps into my consciousness on Opening Day is that this season can erase the past season.  For the twenty Opening Days that I have celebrated as a devout Phillies fan, the day has been a chance to wipe away the previous season.  The underlying feeling that this time my team can finally step forward and become the champions, and make everyone forget the most recent loss, is not there this year.  This year is all about hope that can be realized and hope that has already been realized.  This year is about defending the title.  As I walked passed fans celebrating in the street on the way to the subway late that cold Wednesday night, I thought to myself about how much fun it would be to watch my Phillies defend their World Championship.  This Opening Day is the first of an 162-game marathon where the Phillies are the Champions, and no one can take that away from them-- and they have a chance to do it again.  Repeating is unlikely, but undeniably possible, and today is the day that quest begins.  There is no feeling of erasing the previous year, but building on it, while still receiving the clean slate where the first Phillie to hit safely will be batting 1.000 for just a little while.

I have wondered for a while what this year will feel like.  The past twenty and a half seasons that I have followed the Phillies, I have been quietly hoping for an underdog team to rise up and claim the World Series Title.  Each year, the nagging feeling that we probably will not do it again is there.  However, I do not feel this way at all as we enter the 2009 season.  I will watch almost every game, and sweat out every close moment, but this time, the Phillies are already Champions.  This is the defense of the title.  Nothing can be taken away from last season, yet everything can be gained all over again.  Until the first loss, the team is undefeated.  Every hitter can hit 1.000.  Every pitcher can be perfect.  Only this time, every player is a Champion. 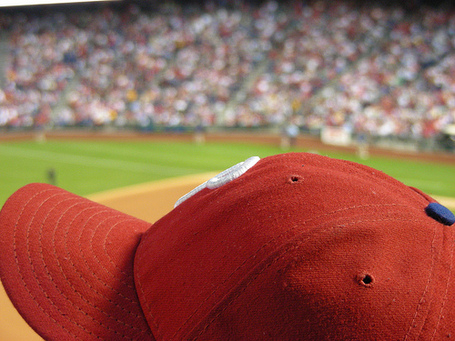