Yep, totally saw that one coming.

On a day when the glories of the recent past were celebrated, with the 2008 Phillies receiving their World Series rings on a blustery April afternoon, the 2009 Phillies showed some of the same resilience that their champion predecessors showed last year.  After falling behind 10-3 after a downright awful start by Joe Blanton, the Phillies rallied for eight runs in the bottom of the 7th inning, including four bases loaded walks, giving them an 11-10 lead.

The Phillies added what proved to be an incredibly valuable insurance run in the bottom of the 8th on an Eric Bruntlett sacrifice fly.  Brad Lidge, despite giving up a solo shot to Matt Diaz, held the lead, and the Phillies put their first victory of the season in the books, 12-11.

With the improbable come-from-behind victory, the Phillies held off a home opener sweep and head to Colorado hoping to continue in the winning direction.

PLAYER OF THE GAME: Ringless Raul Ibanez, who connected for the Phillies first (and so far only) home run of the season in the 2nd inning, a long shot off the facing of the upper deck.  He would add another RBI single in the eight run 7th inning. 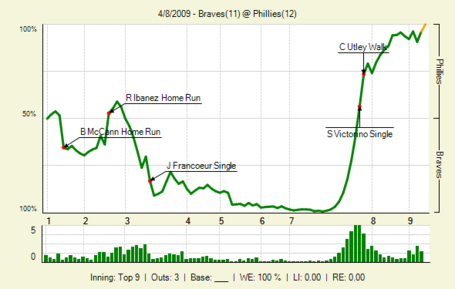