Episode One of the 2009 Phillies/Mets Rivalry Extravaganza went to the Metropolitans by a score of 7-4.  A terrible pitching performance by Chan Ho Park, and uncharacteristic baserunning mistakes, were ultimately the Phillies undoing, with Park giving up seven runs and six walks in 4 2/3 innings pitched in what might be his last start as a Phillies, if God is good.

Credit to the Mets for capitalizing on all the free baserunners, and to Mike Pelfrey for not completely melting down despite giving up 11 baserunners in 5 1/3 innings.

Particularly notable?  J.A. Happ.  Yeah, him.  Two innings pitched, one walk (to Pedro Feliciano!?) and no other baserunners.  HINT HINT, Charlie and Ruben!

And for the first time, the Phillies got a glimpse at the Mets Super-Duper Revamped Deluxe 2009 bullpen and... they did good, I admit grudgingly.

PLAYER OF THE GAME: J.A. Happ, for stopping the bleeding, and making the case that needed to be made... 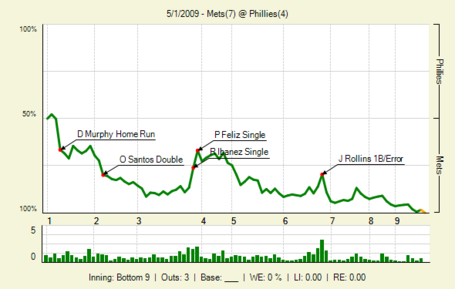