Isn't it great, just when the pitching gets its act together (more or less), the bats go silent?  Although Brett Myers was not particularly sharp today, he did his job, holding the Braves to one run over six innings, surrendering five hits and walking two, but also hitting two batters and nearly hitting a third (pitcher Kenshin Kawakami).

But, it was Kawakami himself who controlled this game, striking out six and giving up two runs in six innings.  He also got a hit himself, a line single to right center in the second inning.

There was a heavy wind blowing in that seemed to knock the piss out of a couple deep fly balls hit by the Phillies, including one by Raul Ibanez.

The offensive stars of the game were Ryan Howard, who hit two doubles and scored both Phillies runs, and right fielder Matt Stairs, who reached base all four times he came up with a single, a double, and two walks.

The goat of the game?  Special Agent Jack Taschner, who just blew it in the seventh, allowing two runs and three hits in two thirds of an inning.

Villain of the game?  Casey Crotchman (yes I know!), who had three hits and drove in three of the Braves runs.  I wish they had kept Mark Teixeira!

With the Mets victory against the Pirates, the Phillies now sit a game and a half back of New York in the National League East.  Right where we want them....(?) 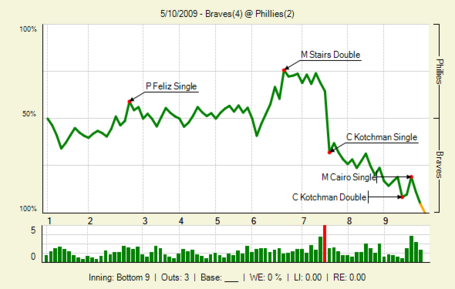