If there's ever a crazy win where you almost wish the team had lost under normal circumstances, this would be one of those victories.

The Phillies burned through their bullpen, including today's expected Game 2 starter JA Happ, in locking down a 10-6 victory over the Washington Nationals.

Brad Lidge, again, was ineffective.  Although he surrendered only one truly hard-hit ball (Willy Harris' two run double that tied the game), he blew two run lead for his second blown Save in seven chances, allowing the Nats to tie the game and 6-6 and send the contest to extra innings.

From there out, the Phillies pen took control, with JA Happ pitching two masterful innings in relief, easily setting down the heart of the Nationals' batting order on swinging strikeouts.  And the offense capitalized on the Hindenburg disaster that is Kip Wells, tacking a four spot on the beleaguered righty.

After the game, the Phillies announced that utility space-filler Miguel Cairo would be designated for assignment, and Drew Carpenter would be recalled from AAA Lehigh Valley to start today's second game.

And the Phillies go into today's twin bill with virtually no bullpen and needing a quality start from this guy.  Should be a fun day, all around.

PLAYER OF THE GAME: JA Happ, who deserves a shot and may never get one at this rate... Ryan Howard, despite a huge three run homer that gave the Phillies the lead in the 7th, looked awful in his other five at-bats. 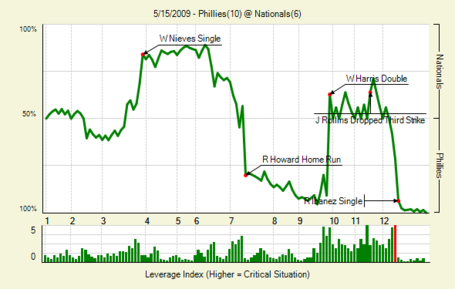