The good news is that Jamie Moyer was not terrible last night.  Six innings pitched, three runs allowed (one in each of the first three innings) eight hits.  And an inordinate number of those eight hits were unlucky bloops that plunked down in no man's land between the infielders and outfielders.  Jamie did what he has done best: keep hitters from making solid contact.

Unfortunately, Aaron Harang kept the Phillies bats almost completely at bay, save for a Raul Ibanez home run, striking out nine in seven innings and halting the Phillies' winning streak at five games.

Reliever Chad Durbin surrendered the Reds other two runs in the seventh, on a two run triple from Brandon Phillips.

Again, there were some good things to take away from the game.  Jamie Moyer was serviceable, albeit against a week, Votto-free lineup.  But, um, that's just about it.  Chase Utley went hitless, as did Jayson Werth, striking out three times and narrowly averting the Golden Sombrero by grounding out in the ninth inning for the final out of the game.

12:35 start today for the last game in the series. 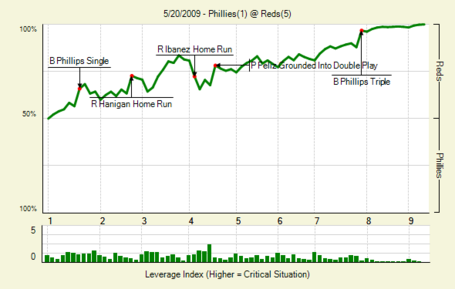