For one night at least, Yankee Stadium II (III?) lived up to its reputation as a home run hitter's paradise, with a total of seven baseballs flying out of the yard.  Thankfully for the Phillies, all of the Yankees home runs were solo shots, and so the Phillies cruised to an easy victory, topping the Yankees by a score of 7-3.

To be fair, the home runs by Werth, Ibanez, Rodriguez, and Teixeira were all no doubters.  Jeter's was pretty well struck, too.  Also, both benches were warned to cool it on the up-and-in stuff, after Yankees starter A.J. Burnett plunked Chase Utley after Rollins' first inning blast, and Brett Myers answered by throwing behind Derek Jeter in the bottom of the inning.  Undoubtedly this forced both pitchers off the inside part of the plate, giving the hitters more of a chance to dig in. 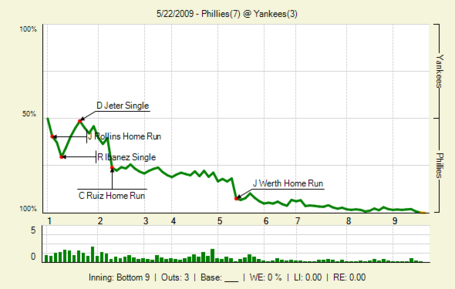