It's a formula for mediocrity: Dominate on the road, flop at home.  That's what the Phillies have been doing this year.

And again, with Brett Myers on the mound, the long ball was the story of the game, with homers by Cody Ross and Dan Uggla.  All while the top six hitters in the Phillies lineup went a combined 4-23 off Burke Friggin' Badenhop, including a first inning that saw them load the bases with one out, only to have the potential rally snuffed out by a double play.

The Phillies' offense came on solo home runs from the team's hottest hitter (Carlos Ruiz, would you believe) and the man himself, Matt Stairs, who bombed a 444 foot blast into the top deck in right field.

Brett Myers was pitching well until the sixth, when he gave up three runs and started showing indications that he was in some discomfort.  Reports today are showing that Myers injured his hip in the inning, and conflicting reports say that he's been in pain for some time.  Hopefully he won't require the apparently chic Utley Surgery, because that would suck. 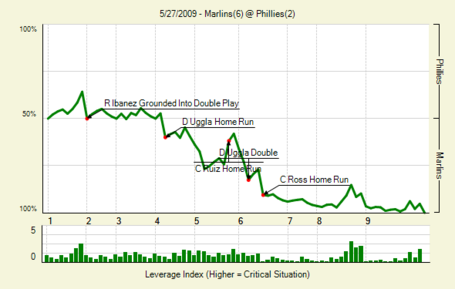