I really hope Cole Hamels bought Ryan Howard a drink last night: all he did was take the attention away from his subpar performance on the mound (6 IP, 6 ER, 8 H).  No, no one's going to be talking about that, thanks to Howard.

Howard connected for two titanic blasts last night off Nationals starter Shairon Martis, the second of which -- a grand slam in the 3rd inning, which put the Phillies ahead for good -- landed in the third deck of Citizens Bank Park, only the second ball to do so.  The other?  From Howard, of course, nearly three years ago off Mike Mussina.

Hit Tracker hasn't updated yet (as of early Sunday morning) but you'd have to think Howard might have edged out teammate Raul Ibanez and his Yankee Stadium blast last Friday for longest homer in the majors this season.

As for the game itself, it was your classic Nats-Phillies matchup, and can be best described in the same manner as my bathroom after a trip to the all-you-can-eat Super Buffet -- sloppy, and a lot of runs.  These games are starting to remind me of those classic Phils-Cubs games at Wrigley, when the wind was blowing out.  Screw realignment, that was hot baseball.

The Phillies bullpen did its job, with only the two hits allowed by Scott Eyre as significant blemishes.

Brad Lidge faced the minimum three in the ninth for the save, bailed out by a double play that, on a normal night, would have made headlines -- on a grounder up the middle, Rollins ranged to his left and scooped the ball to Utley, who took the ball barehanded and threw to Howard in one motion to complete the play.  It was truly pretty and among the four or five best 6-4-3 double plays I've ever seen.

PLAYER OF THE GAME: Carlos Ruiz, for another fine night of keeping the pitching staff in line and for scoring two runs.  Now come on, seriously... who do you think? 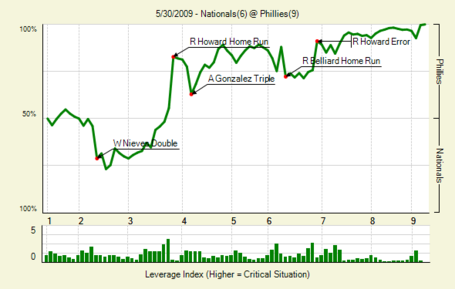