It took over a month, but Cole Hamels has his first victory of 2009.  Hamels went six strong innings, striking out seven and giving up two runs on three hits, as the Philadelphia Phillies topped the Atlanta Braves by a score of 10-6.

Jayson Werth, Chase Utley, and Chris Coste all homered for the Phillies, who scored four runs in the second inning on just one hit after a botched throw by Jo-Jo Reyes on a Cole Hamels dribbler up the first base line, followed immediately by a two-run double by Jimmy Rollins.

It wasn't all great news for the Phillies.  Shane Victorino's 16 game hitting streak came to an end, and closer Brad Lidge strugged yet again, allowing three runs on a Casey Kotchman home run in the 9th with nobody out, prompting Ryan Madson to start warming up in the bullpen.  Lidge then proceeding to retire the next three in order, two on strikeouts, as the Phillies claimed their second victory on the season over Atlanta.

PLAYER OF THE GAME: Cole Hamels.  The King is Back. 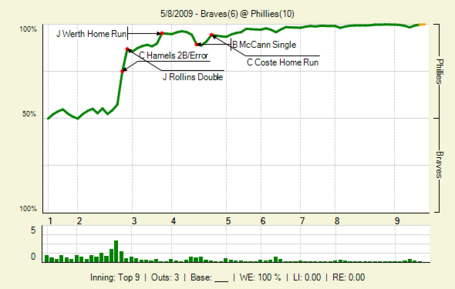