Another weird, close game, but OH MY GOD WHAT A FINISH!!!!

For starter Cole Hamels, it was a bad combination of having less than his best stuff (to say the least) and having terrible luck, as the Mets pounced for three runs in the third on an equal combination of solid line drives and maddening bloops just past the infield.  The Mets took the 4-1 lead to the 7th, when the Phillies strung together a similar inning, tying the game at four runs apiece.

From there, the bullpens took over, with the Mets threatening seriously in the bottom of the ninth only to come away empty handed, and the Phillies getting some unbelieveable bad luck after hard-luck shortstop Jimmy Rollins hit into a scorching line drive double play.  Chan Ho Park, despite some drama, pitched two scoreless innings (with some help from an awesome diving catch by Jayson Werth in the 10th) and was matched by Mets closer Francisco Rodriguez.

Then, in the top of the 11th, Chase Utley brought out the hammer with a solo home run to right.  Ryan Howard and Raul Ibanez followed with two deep fly balls that barely stayed in the park.  New/temporary closer Ryan Madson pitched a perfect 11th for the Save.

The Mets had about a zillion baserunners but, after that third inning, couldn't get anyone home.  Lucky for us...

PLAYER OF THE GAME: "Chase Utley, you are the man." - HK (Hereinafter "CUYATM"). 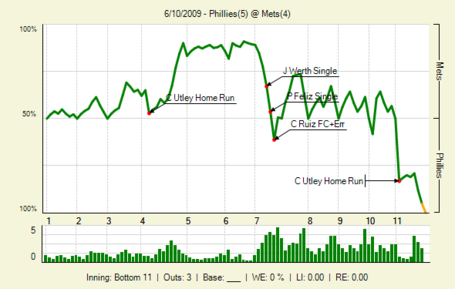