Last night the Phillies were undone in part by an unfamiliar foe -- shoddy first inning defense.  The Fightins' three first inning errors, combined with rookie Antonio Bastardo's complete absence of command, led to a five run first for Boston, giving them a lead they would never relinquish.  Despite being pulled due to a 90 minute rain delay after the first inning, it's unlikely Bastardo would have lasted much longer anyway.

And Sox righty Daisuke Matsuzaka wasn't too much better, allowing four runs in four innings on seven hits and a walk, with homers by Raul Ibanez and Pedro Feliz.

But then the Phillies' beleaguered, overworked bullpen gave it all back, with Jack Taschner and Sergio Escalona surrending five runs in a combined three innings of work, after Chad Durbin's excellent three innings of scoreless work immediately after the rain delay.  And it could have been much, much worse for Taschner, but centerfielder Shane Victorino made a magnificent full-speed over-the-shoulder catch with the bases loaded and two outs in the fifth off a deep drive from Kevin Youkilis.

Once again the middle of the order was terrific (Utley, Howard, Ibanez, Werth, Feliz = combined 11-for-23 with three homers), and the "table setters" Rollins and Victorino were a dreadful combined 1-for-10. 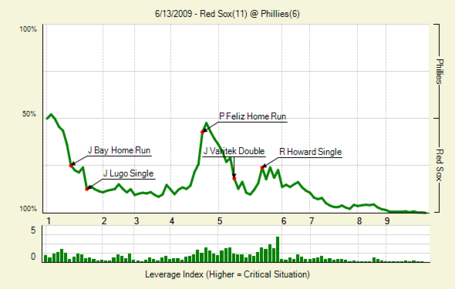