On a beautiful Sunday afternoon, the Phillies did what few teams in either league have been able to accomplish for quite awhile: they slammed Josh Beckett.

The Phillies put 7 runs and 11 hits on Josh Beckett in six innings, including a four run fifth inning and the first two runs in the Phillies six run seventh.  Beckett started off quite well, and stroked a home run himself, but the Phillies deep and balanced attack pressed and ultimately prevailed.

The offensive star of the day was Pedro Feliz -- 3-for-5 with two runs scored and two RBI.

JA Happ just strugged with his command all day, walking six and surrending seven hits in just 5 2/3 innings, yet somehow only surrendering five runs.  He definitely walked a tightrope and at least deserves some credit for not completely melting down.

With the New York Mets losing two of three to the hated Yankees in the Bronx over the weekend, we leave the weekend exactly how we started, with the Phillies leading the NL East over the Amazins by four games. 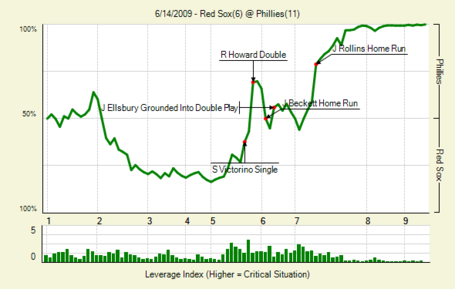