The Price is Wrong (I should be punched in the neck for this headline): Phillies 10, Rays 1

Share All sharing options for: The Price is Wrong (I should be punched in the neck for this headline): Phillies 10, Rays 1

The Price is Right losing horn (via Hicksatpd)

Now that's more like it.  The Phillies did all they needed with two big innings -- a six run first, and a four run fourth, as they went on to beat the Tampa Bay Rays by a score of 10-1.  Wunderkind David Price did not pitch well at all, but he certainly didn't get any help from his defense, with three total Rays errors.  John Mayberry, Jr. put the game away with his three run homer in the first, giving the Phillies a 6-0 lead from which they never looked back.  Shane Victorino and Chase Utley combined for five of the Phillies ten hits.

Look!  A lovely Fangraph, that resembles the continental shelf off the Pacific coast. 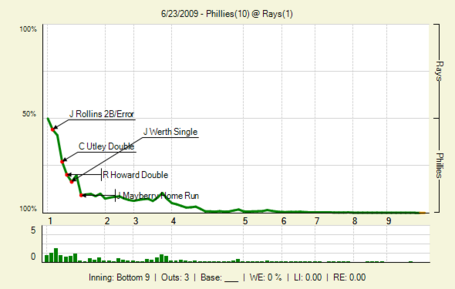