They scored four runs in the first inning, then barely got a hit the rest of the game while Antonio Bastardo got knocked around and eventually left with a shoulder strain.

Then, in the 6th, Pedro Feliz and Matt Stairs pulled off one of the dumbest, most godawful baserunning snafus ever -- Feliz, likely thinking there were two outs, ran on contact when shortstop Eric Bruntlett hit a fly ball to center field.  Matt Stairs, on third, tagged and trotted toward home.  Feliz found himself standing on second base when the ball was caught, and was easily doubled off first before the run could score.  Stairs' potential run would have made the score 6-5 and gotten the Phillies back into the game.  Instead, the bullpen further melted down, and the Rays went on to win 10-4.

This is as hard to write about as it was to watch.  The Michael Jackson "zOMG DEAD" coverage was more interesting.

The Rays take the series, and the Phillies continue sucking at Interleague Play.  Thank God it's almost over.

Below is the Fangraph, or maybe a representation of the sexual response cycle of the human male.  I'm not sure which. 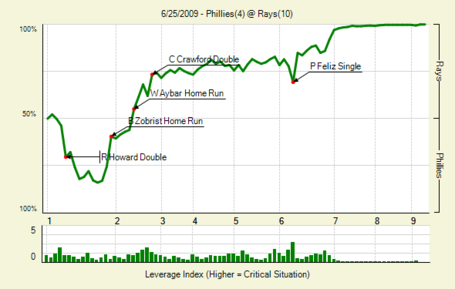