Werth, Victory, and the Pursuit of Happ-iness: Phillies 10, Blue Jays 0

Share All sharing options for: Werth, Victory, and the Pursuit of Happ-iness: Phillies 10, Blue Jays 0

Did Charlie Manuel's closed-door meeting last night help?  For one day at least, it didn't hurt.

Lefty J.A. Happ threw his first career shutout on 100 pitches, and right fielder Jayson Werth was 4-for-4 with a double and two homers, including a titanic shot in the first inning that gave the Phillies all the runs they'd need.  Ryan Howard was 3-for-4 with two runs scored, and Pedro Feliz had a two run homer in the first inning.

Happ was masterful, allowing just five hits and striking out four, providing a beleaguered bullpen with some much needed rest. 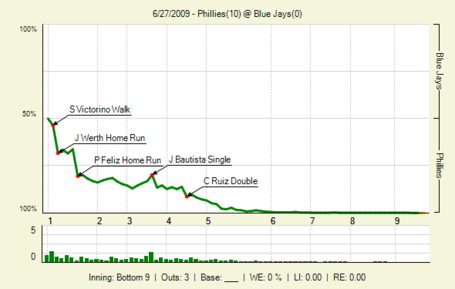