The Philadelphia Phillies certainly made themselves at home in San Diego this week... put their feet on the furniture, used the good china, made long distance phone calls, etc.  Fun to watch!

Last night it was J.A. Happ who stepped up for the Phillies and their resurgent pitching staff, pitching another strong game for his fourth victory of the season.

In the bad news department, centerfielder Shane Victorino had to leave the game with a hip injury.  It remains to be seen how serious it is, but to me the best fallback should Victorino miss time would be a Stairs/Mayberry platoon in right field, with Jayson Werth shifting to center.

The Phillies make the trip up I-5 today for a daunting four-game series against the first place Los Angeles Dodgers.

PLAYER OF THE GAME: J.A. Happ.  It's become clear who really should have won that fifth rotation spot this spring... 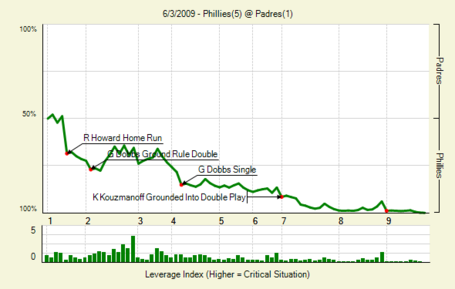