Facing one of the best lineups in the league, in their home park no less, and a very talented young lefthander in Clayton Kershaw likely to exploit the Phillies' left-leaning tendencies, we knew the Phillies would need a strong performance from Cole Hamels last night.  They got that, and then some, as Hamels pitched one of the best games of his career -- a 97 pitch shutout of the first place Dodgers -- that gave the Phillies a crucial game one victory in this four game set, and extended the Phillies lead in the NL East to four games.  The Phillies have now won seven games in a row.

With wife Heidi looking on, Hamels allowed just five hits and walked no batters, and striking out five, en route to his third career shutout and first of 2009.

He did get some help from the defense, though, with two double plays early on that erased Dodgers baserunners, and a nice throw from Eric Bruntlett in right field to nail Clayton Kershaw trying to stretch a single to a double.

As for the Phillies offense, they could have done better, but did enough.  They stranded runners early and lost a scoring opportunity when Ryan Howard froze between third and home on a grounder in the 6th inning.  Jayson Werth had a solid night, with two hits and a walk, and Raul Ibanez drove in the game's second run with an RBI double.  Still, this might have been their toughest matchup of the series (Chad Billingsley is not scheduled to pitch this weekend), so it's great to come away with a win.

And it wasn't just a Phillies' starter's first shutout of the year -- it's the first time the Phillies troubled pitching staff has shut out an opponent all season.

PLAYER OF THE GAME: Cole Hamels.  If anyone is still questioning this guy, I'd like to have some words. 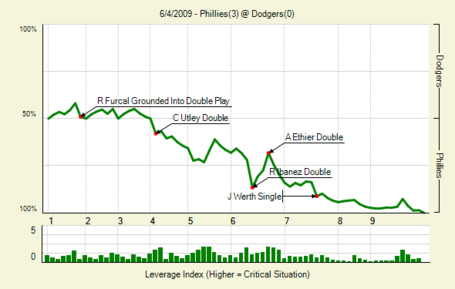