Well, that was ugly.

Closer Brad Lidge blew his fifth save of the season after retiring the first two batters in the ninth, and the potential third out was uncharacteristically booted by the usually sure-handed Pedro Feliz, opening the door for Andre Ethier and his walk-off two run double.

It's far too easy to point fingers and blame Feliz and Lidge for this loss, but the Phillies' failure to drive in the numerous stranded baserunners during the game (cough jimmy rollins cough), along with the thin bench that forced manager Charlie Manuel to play his .120 hitting utility infielder in right field against a lefty pitcher, were more responsible for this loss.

Making the loss more disappointing was the second straight terrific pitching performance from Jamie Moyer, who has shown that, while he may not be all the way back to being the Moyer of old, he's at least capable of such performance.

It's their first loss in over a week, and Dodgers are a really good team, but damn that one would have been nice... 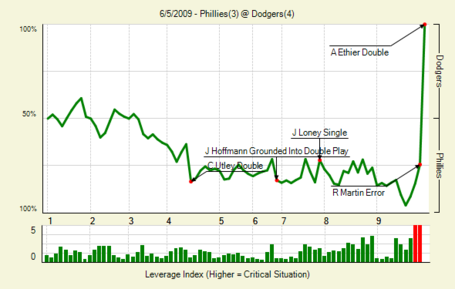