Share All sharing options for: Make That Six: Dodgers 3, Phillies 2

The day after he blew a save that wasn't his fault, today Brad Lidge blew a save and it was entirely his fault.  Lidge gave up a ninth-inning pinch-hit home run to Rafael Furcal (Rafael Furcal!), blowing his sixth save of the season.  And it's only June 6!

Joe Blanton pitched great.  Matt Stairs was almost the hero again in Los Angeles.  And the rest of the bullpen was masterful until the very end.  But Lidge's ninth inning troubles ruined this one for the Phils.

Here's something to think about -- Lidge's last four blown saves have been against the elite teams in baseball (two against the Yankees, two against the Dodgers).  Are his troubles turning into a loss of confidence that may be affecting him more against the tougher teams?

Who knows, but right now, the Phillies are being hurt by his appearances.  If I were the Phils, I'd find a way to get Lidge some rest while letting Romero and Madson take over the 8th/9th duties for a while.

At least the Mets still suck. 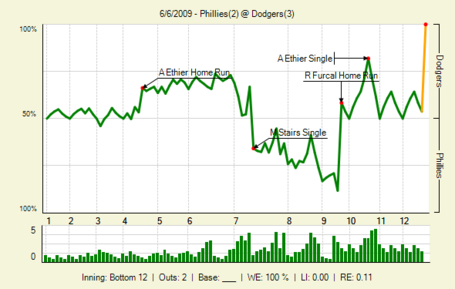