We all kind of figured the Mets were going to win this one.  What we didn't know was that the game was going to turn into a slugfest -- the teams combined for seven home runs (four by the Phillies, three by the Mets).  By the end, though, the Mets pulled ahead in the only tally that matters, with Francisco "loves little boys" Rodriguez slamming the door for his 16th Save in as many chances.

And Santana helped his own cause with an RBI double in the 6th inning, which turned out to be the difference in the game.

Losing to Johan Santana is nothing to be ashamed of, but it'd be nice to, you know, win the game after you whoop his ass.  Oh well.

PLAYER OF THE GAME: Jimmy Rollins - 3-for-4 with a two run homer and a takeout slide in the 9th inning, breaking up a potential double play. 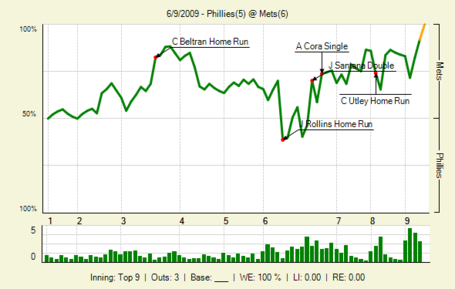