Trailing 3-2 in the top of the 8th, the Phillies quickly took the lead after Mike Gonzalez surrendered back-to-back home runs to John Mayberry, Jr. and Pedro Feliz.  Then, in the bottom half, after retiring the first two batters, Ryan Madson walked Gregor Blanco, who promptly advanced to second on a poor pickoff throw by Madson.  Blanco then scored on a double by Martin Prado, advanced to third on a fielding error by Jayson Werth.

The game finally ended on a one out RBI single by Prado in the 10th.  For his part, Prado was 4-for-6 with a home run, a double, and four of the Braves five RBI.  Blanco and Prado accounted for seven of the Braves' 13 hits.

I keep wondering if this isn't Karmic recentering due to all those improbable comebacks earlier this season.  For instance, Ryan Howard's two out ground rule double would have easily scored Chase Utley from first had it not hopped the wall.  Oh well. 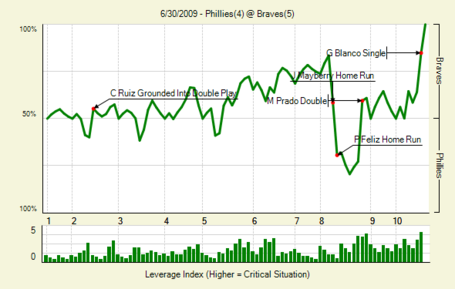