Share All sharing options for: That's all they got, one God-&$%@ed hit?: Phillies 4, Marlins 0

On a muggy night in south Florida, Jamie Moyer continued his dominance of the Florida Marlins, allowing just one hit -- a leadoff single by Jorge Cantu in the fifth inning -- and walking just one batter in seven innings pitched, as the Phillies cruised to an easy 4-0 victory over the second place Marlins.

All four of the Phillies runs came by the home run off Marlins starter Chris Volstad -- two by Raul Ibanez, and one from Ryan Howard, the 200th of his career.

Not all of the returning All-Stars fared as well; Jayson Werth took the Golden Sombrero, striking out four times.

The Phillies have now won six in a row overall, and sit five games ahead of the Marlins in the standings. 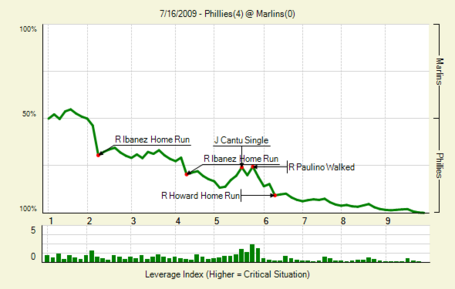