Swept on the road by the Braves for the first time since 2005, the Phillies go into the weekend tied for first place with the Florida Marlins, with the Mets just one game back, and the Braves only two games behind.

What happened?  The old familiar: flaccid bats, and a bullpen fold.  J.A. Happ continued his strong pitching from his last start, only allowing two runs on a Casey Kotchman home run in seven innings pitched.  Then, in the 8th, the struggling Ryan Madson came in, and surrendered three runs, including two on a pinch hit blast from Garrett Anderson on a cutter/slider mess right over the plate.  Why Madson never seems to throw his changeup anymore, I just don't know.

The Phillies got some bad breaks, most notably Jayson Werth getting tagged out at home in the top of the 8th inning trying to score on a wild pitch -- to their credit, Brian McCann and Mike Gonzalez played the bounce perfectly.  But ultimately, you only score two runs, you generally lose. 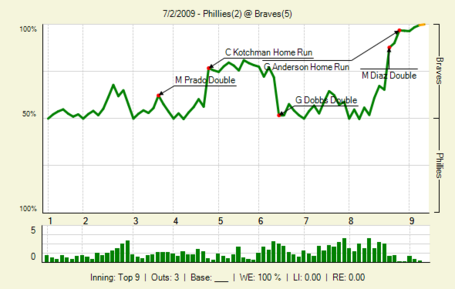