And so it was, that the mighty Phillies offense was held to a single run... resulting from a wild pitch.

Both starting pitchers -- J.A. Happ and Joel Piniero -- were terrific in the early going, until the 6th inning, when Happ gave up four runs on a series of bloops, dunks, and a couple line drives, suffering his first loss of the season.  The bullpen didn't help matters, with Tyler Walker surrendering two runs in his inning of work, and Andrew Carpenter surrendering a solo home run to the second newest Cardinal, Julio Lugo.

Joel Piniero was his usual (2009) self, inducing 12 grounders and striking out three in his six innings of work.  And brand new Cardinal Matt Holliday had four hits.  Strangely, Albert Pujols was held to one hit in five at bats, one of the weird bloopers in the 6th inning.

A very ugly night for the Phillies, and a disappointing potential farewell from Happ, who may be headed north in a deal for Roy Halladay in the next few days. 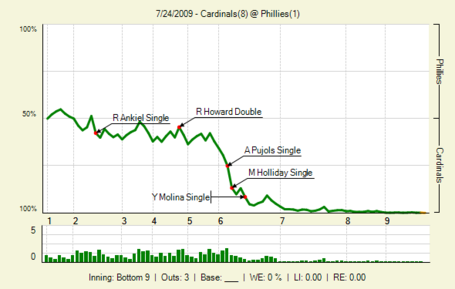