Among the Powers of the Earth: Phillies 7, Mets 2

Share All sharing options for: Among the Powers of the Earth: Phillies 7, Mets 2

Leave it to emergency starter Rodrigo Lopez to turn in one of the Phillies' best starts of the past month.  Lopez went 6 1/3 innings, allowing six hits and two runs, while the Phillies slammed Mets' starter Livan Hernandez early and often, scoring all seven runs in the first three innings of the game.  Lopez threw a good, heavy fastball and didn't give up too many hard hit balls until the 7th inning, when he was clearly starting to wear down.

Jimmy Rollins had his second multi-hit game in a row, going 2-for-5 with two doubles.  Rollins, Shane Victorino (3-for-5) and Chase Utley (2-for-4) combined for seven of the Phillies 11 basehits.  Two walks for Pedro Feliz.  Yes, that guy.

With tonight's victory, the Phillies have guaranteed that the Mets will leave town no better than tied in the standings with the Phils. 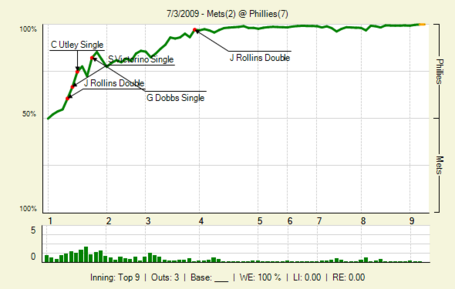