Every win's a good win, every intra-division win is a great win, every win against the Mets is fantabulous.

Let's face it, the Mets are running a Triple-A offense out there right now.  When Gary Sheffield leads your team in home runs, there's something terribly wrong.  Yes, the Mets have been eviscerated by injuries, but those injuries just served to reveal how shallow their roster really is.

The story of the day, and the weekend, was the re-emergence of two of the crucial components of last season's championship run.  Jimmy Rollins was 5-for-11 in the series with three doubles and a home run to lead off today's game against Johan Santana.  And Brad Lidge struck out the side in the ninth inning today in what was argubly his filthiest outing as a Phillie - 14 pitches, nine strikes.  He was locating his fastball, and his slider was ridiculous.  If Lights Out Lidge and Good Jimmy (or at least OK Jimmy) are back, this team might be poised to make a pretty good run this summer.

The Phillies' second run came on a sixth inning solo bomb from Chase Utley off Johan Santana.  It's his second home run this season of the former Cy Young Award winner. 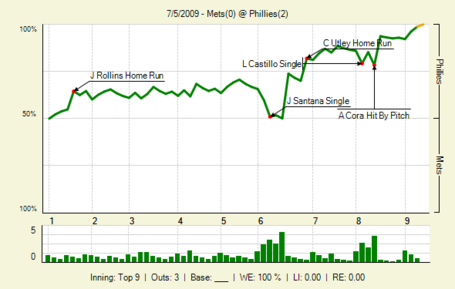