Share All sharing options for: EVERYBODY HITS: Phillies 22, Reds 1

The Phillies tagged Cincinnati pitching for 22 runs, including a franchise record-tying 10 runs in the first inning, while Cole Hamels cruised through seven innings allowing just one solo home run to Jonny Gomes in the second inning.

Man of the hour Shane Victorino, one of the final five All-Star candidates, led the charge, with four hits, including a two run homer that started the scoring in the first, four RBI, and five runs scored.  Everyone else in the starting nine had at least one hit, including two from Hamels, and Jayson Werth put an exclamation mark on the scoring in the 8th with a grand slam off Reds emergency reliever/backup shortstop Paul Janish.

The 22 runs scored was the most for the Phillies since June 11, 1985, when the Fightins beat the Mets by a score of 26-7.  Check out that boxscore.  Man, five hits for Juan Samuel.  Two first inning homers for Von Hayes.  10 runs off Calvin Schiraldi!

Good old-fashioned butt-whooping.  Let's hope they can keep it going.

Dig that Fangraph.  98.7% chance of victory after the first inning. 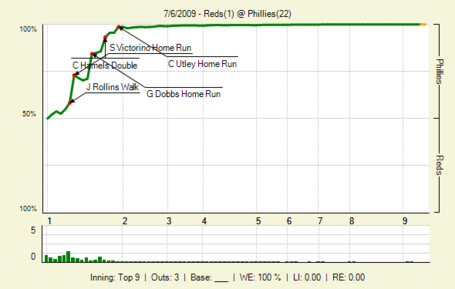