No, there's no statistical or otherwise rational basis for it, but somehow, you just knew the Phillies would struggle to score runs last night, after Monday's 22 runs outburst.  And they did.

After back-to-back bombs by Ryan Howard and Jayson Werth (off a righthander!) in the 2nd, and an RBI double by Chase Utley in the 3rd, the Phillies could not do anything else for the rest of the night as the Reds chipped away, scoring their first three runs on two Brandon Phillips home runs.  Then, in the top of the 9th with the score tied, Brad Lidge looked more like early 2009 model again, allowing a leadoff double to Joey Votto, followed by an RBI single by Ramon Hernandez.  And despite a couple deep, loud outs off the bats of Chase Utley and Jayson Werth in the bottom of the ninth off Francisco Cordero, the Phillies couldn't get it done again.

The Phillies left 12 runners onbase -- which is OK if you score 22 runs, but not if you're 0-for-5 with a runner on third and no outs.

These games happen, they're just kind of disappointing after a game like Monday's. 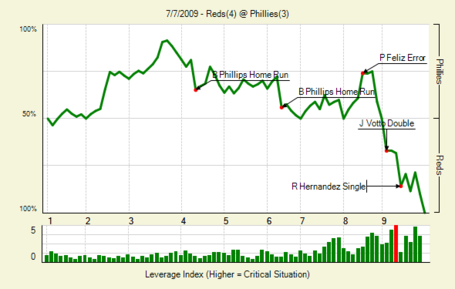