Hamels nearly matched Roy Halladay's brilliance last Wednesday, pitching a five-hit shutout, striking out nine and walking none.  Has he returned to 2008 postseason form?  No.  Tonight at least, he was better.

On the Debbie Downer tip, the Phillies' offense was still fairly quiet, plating an unearned run in the top of the first on a throwing error from Orlando Cabrera, and another run on a solo homer from Chase Utley in the fifth.

Johnny Cueto, to his credit, pitched effectively, despite surrendering a number of hard hit balls, particularly in the first two innings.  He limited the damage, walking only one in his five innings pitched.

The Phillies wait for the conclusion of the Braves/Giants NLDS. 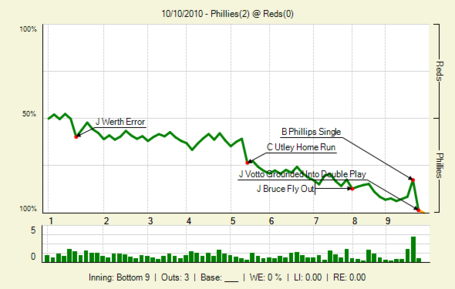