The Sweet Life of Tim and Cody: Giants 4, Phillies 3

Share All sharing options for: The Sweet Life of Tim and Cody: Giants 4, Phillies 3

The Super-Ace Awesome Yes Matchup For Pitchers between Tim Lincecum and Roy Halladay did not quite live up to expectations, with each Cy Youngsmith surrendering two home runs.  Lincecum, however, got the better of the evening, keeping the Phillies to just three runs in seven innings.  Halladay coughed up a pair of homers to the truly loathsome elfin-faced Author of All Lies, Cody Ross.

Both pitchers expressed frustration with home plate umpire Derryl Cousins, whose strike-zone was inconsistent, to put it mildly.  To be harsh, it was a pile of dead dogs at a tractor pull, covered in chicken droppings, lit on fire by an errant firecracker.  The low strike was virtually non-existent.  The game-changer came in the sixth, with two outs, when Roy Halladay thought he had a called strike three on Pat Burrell.  The pitch was called a ball, and Burrell proceeded to smash the next pitch to left, right into the basket of Raul Ibanez.  So a double it was!

The Phillies scoring all came on home runs: a solo shot from Carlos Ruiz in the third, and a two run shot from Jayson Werth that made the score 4-3.  Where it would remain, forever, after weirdly bearded closer Brian Wilson locked it down. 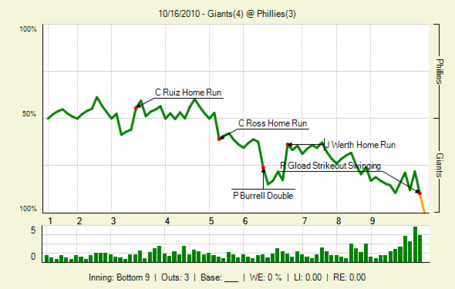