After a frustrating 4-3 loss Saturday night in game 1 of the NLCS, the Phillies needed a win tonight to avoid going to San Francisco down two games. They faced Giants starter Jonathan Sanchez, against whom they did next to nothing in the course of his career, and relied upon Roy Oswalt, the lone starter who gave up runs in the NLDS.  In search of needed offense, Phillies manager Charlie Manuel juggled his lineup, switching Chase Utley and Placido Polanco to second and third in the order.

The game started well enough, as Oswalt retired the side and Sanchez struggled with his control. Three walks and a Mike Fontenot fielding error later, the Phillies had a 1-0 lead as Sanchez struck out the side and the quirky strike zone of home plate umpire Dan Iassogna left both benches frustrated. But Sanchez settled in after that, as both pitchers sailed through the early innings.  With one out in the fifth, however, frustrated rodeo clown/8-hole hitter Cody Ross tied the game with a home run hit into the left field seats, his third in two games, as Oswalt repeated Halladay's mistakes the night before and threw him an inside strike.

In the bottom of the 5th, the Phillies offense regained the lead, again in small-ball style. After a Shane Victorino double, Chase Utley moved him to third on a fly ball to right, and Placido Polanco drove him home. The game then stayed 2-1 as Oswalt and Sanchez continued their pitching duel.

In the bottom of the seventh, Oswalt lead off with a single to center, prompting Giants manager Bruce Bochy to lift Sanchez and bring in Ramon Ramirez. After Shane Victorino bunted him to second, Chase Utley was intentionally walked. Placido Polanco then singled to center field on a hard hit ball to center fielder Andres Torres, who came up throwing home as Oswalt rounded third. Phillies third base coach Sam Perlozzo held up a clear-as-daylight stop sign, but Oswalt blew right through it. Fortunately for the Phillies, first baseman Aubrey Huff cut off Torres' throw, and the extra time he needed to pivot and throw to catcher Buster Posey was just enough to allow Oswalt to score.

As Ryan Howard then struck out, Utley and Polanco executed a double steal, prompting Bochy to order an intentional walk of Jayson Werth in order to get to the injured, slumparific Jimmy Rollins. And who should be the clutchiest clutcher who ever clutched? Why, J-ROLL, of course, who smacked a bases-clearing 2-out double high off the right field wall that put the game pretty well out of reach.

Now: Everyone out there who thought Jimmy Rollins would knock in four runs after last night's game, raise your hand. Now smack yourself with it. You did not, you big liar. But it sure feels good, don't it?

Oswalt came in to pitch the 8th, and after allowing two runners to reach with two outs, manager Charlie Manuel appeared to come out to get his starter. But as he has done with his starters in the past, Manuel left Oswalt in, who then retired Aubrey Huff on a liner to center field. Ryan Madson didn't have the cleanest ninth, but got through a scoreless inning to end the game. 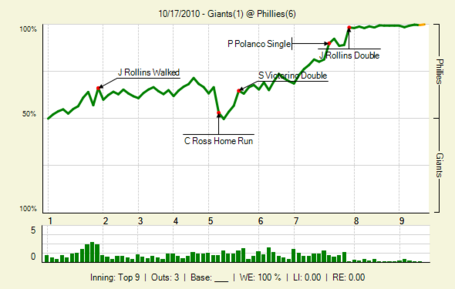