Share All sharing options for: A Vicious Caining: Giants 3, Phillies 0

So you had to like this matchup, right? Cole Hamels, once-and-again post-season demigod, on the mound in a big Game Three matchup against Matt Cain, the one Giants starter against whom the Phillies had enjoyed past success. The team had scored six runs when they evened the series in Game Two, with sparkplug Jimmy Rollins seeming to have found his stroke with two great bases-loaded at-bats, resulting in a walk and a three-run double. All good, right?

Well, no: Cain was outstanding over seven innings, holding the Phils to two lousy singles and three walks, striking out five on 119 pitches. The Phils had him in moderate trouble twice in the early going: with two on and two outs in the third, Cain induced a Chase Utley groundout, and an inning later he put two on with one out before inducing a can of corn to left from Jayson Werth and blowing three fastballs past Raul Ibanez.

In the bottom of the fourth, the Giants scored all the runs they'd need off Hamels, who had gone through the lineup without a blemish through the first three innings. Edgar Renteria led off with a single and advanced to second on a Freddy Sanchez bunt. Hamels struck out Buster Posey on a full-count fastball at the eyes to notch the second out, but walked Pat Burrell to put two on. Then, inexplicably, evil elf Cody Ross got another low fastball, and while he didn't turn it into a souvenir, he did smack into left for a run-scoring single. Aubrey Huff, dropped to the six-spot in Bruce Bochy's lineup, followed with a grounder between first and second that Utley got to but couldn't corral, scoring Burrell to give San Francisco a 2-0 lead. The Giants made it 3-0 an inning later when Aaron Rowand, inserted into the lineup in place of struggling Andres Torres, led off with a double and, after Hamels retired the next two hitters, Sanchez ground a hot shot that bounced off Utley and trickled into center, plating Rowand.

Cain and the Giants relievers did the rest. The righty escaped from his last jam in the top of the seventh, after Carlos Ruiz was hit by a pitch and Ross Gload walked with two outs. Shane Victorino worked the count to 3-1, fouled off what would have been ball four, then rolled a grounder to Sanchez at second to end the threat. Lefty Javier Lopez worked a 1-2-3 eighth, and Brian Wilson closed it out after allowing a one-out single to Rollins by getting a 4-6-3 double play from Ibanez, who remains hitless for the post-season NLCS. 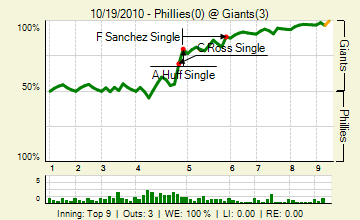