In a game with major playoff implications for the Phillies, Charlie Manuel inexplicably sent Kyle Kendrick to the mound and fielded a lineup that included Greg Dobbs.

Hold on, let me try again.

In a game with playoff implications for the Braves, Eternal Manager Bobby Cox's team was inexplicably bludgeoned to a pulp by a lineup that included Greg Dobbs and was mostly shut down for 5 innings by a painfully mediocre Kyle Kendrick. 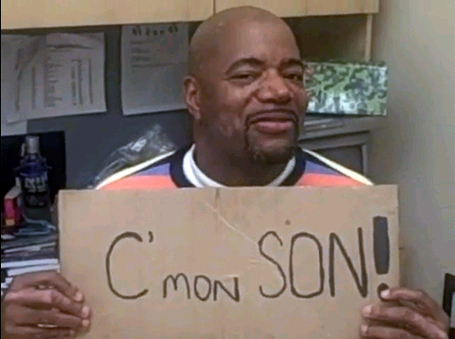 We'll go with bullets for this one:

-This game was actually close until the top of the 6th when Rollins, who had had a few pretty discouraging ABs earlier in the game, came up with the bases loaded and two outs and launched reliever Mike Dunn's first pitch over the left field wall for a grand slam. Whoa. With the score 7-2, Charlie was able to go to the bench.

-Immediately prior to Rollins' grand slam, Domonic Brown worked perhaps his best plate appearance as a Phillie against the always tough Peter Moylan, fouling off a few tough pitches and watching a few more for the bases-loaded walk to make the score 3-2.

-OFB (Old Filthy Bastardo) looked realllly good in one inning of work as he struck out the side around a few singles. He was spotting the fastball and the slider looked crisp. He could certainly come in handy in the NLDS against one Joey Votto.

-The score was 11-2 in the bottom of the 9th when Mike Zagurski loaded the bases with two outs and surrendered a bases-clearing double to Derek Lee. David Herndon came on and got the last out, but not before throwing like 7 straight balls and causing Charlie Manuel to get Madson up in the pen.

-The Braves actually managed to get people to come to this game! No word yet on how much they were paid.

-The Braves are a pretty sure bet to get the wild card at this point, but as of posting, the Padres (who need a sweep) are up 6-1 against the Giants.

Tomorrow Vance Worley gets the start against Tommy Hanson on national TV. Should be exciting for the kid. 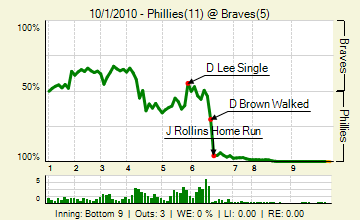