No Clinch For You! Phillies 7, Braves 0

Share All sharing options for: No Clinch For You! Phillies 7, Braves 0

Tommy Hanson against Vance Worley.  A team with a playoff spot on the line against a team that locked one up games ago.  A team playing in front of its largest home audience in its stadium's history against a team playing its regulars just so they don't get rusty.  This one's outcome was easy to predict before the first pitch was thrown.

But baseball games have to be played, not just predicted.  And this one just proved the point even more.  The Phillies got six hits off Hanson but left 8 men on base, as he blanked them through 5 innings.  Worley was even better.  He held the Braves to 1 hit and 2 walks over the same 5 innings.  With an inning of relief from Jonny Venters and Antonio Bastardo, the game was scoreless through 6.

Then the Braves fell apart, again with an assist from poor fielding by Brooks Conrad.  The Phillies batted around plus one in the seventh, scoring 4 runs.  It was all small ball:  three singles, three walks, one wild pitch, one stolen base, and one error.  Another small ball run in the 8th made it 5-0, and two more in the 9th, with the first extra-base hit involved in the scoring, a double from Wilson Valdez, sealed it for the Phillies, as Danys Baez, Ryan Madson, and Jose Contreras were close to perfect in relief.

On a day the team and its fans thanked Bobby Cox, the schedule was kind to the Braves.  But, they turned a gimme into a gift for the Phillies.  With a Padres win today, the season is on the line for the Padres, Giants, and Braves tomorrow.

The Braves get the pleasure of playing for the postseason against Cole Hamels and Roy Oswalt (and various other relievers).  The Phillies square off against Tim Hudson. 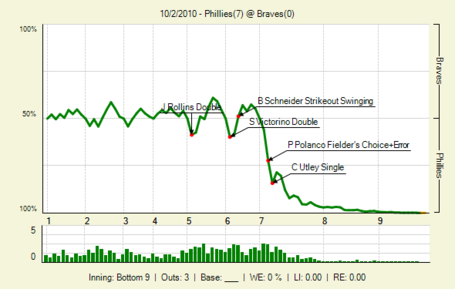