It was a game of bullpen catastrophes large and small, and the Giants came out ahead, taking a 3-1 series lead, sitting just one win away from a World Series berth.

Phillies' starter Joe Blanton's performance was far from a disaster but it certainly wasn't very good.  Plenty bad enough to feed the fires for everyone who thought Charlie Manuel should have brought Roy Halladay in to pitch on three days' rest.  The right-hander lasted just 4 2/3 innings, surrendering five hits and three runs.  His opponent, Madison Bumgarner, did not fare much better.  After cruising through the first four innings, Bumgarner was touched for three runs in the fifth, and was pulled after 4 2/3 innings as well.

The Phillies took a 4-3 lead into the bottom of the sixth, which is when all hell broke loose.  Reliever Chad Durbin issued a lead-off walk to Pat Burrell, who then advanced to third on a "double" from Cody Ross, the Imp of Satan.  Both then scored on a double from Pablo Sandoval, a dead fastball hitters who was fed nothing but fastballs from the ineffective Durbin.  Durbin escaped the inning without further damage, but the Giants led 5-4.

The Phillies tied the game off back-to-back doubles from Ryan Howard and Jayson Werth to lead off the eighth.  Which set up one of the more unusual personnel moves we've seen since the Phillies recent postseason run began in 2007.

Rather than go to Brad Lidge for the bottom of the ninth of the tie game, Charlie Manuel sent Roy Oswalt into the game.  Today is Oswalt's "throw day," and although he had apparently had a bullpen session earlier, Manuel evidently decided that Oswalt was the better choice, and that Lidge would be saved for an eventual/hypothetical lead.

Unfortunately, the strategy backfired.  Relying exclusively on fastballs, Oswalt retired Freddy Sanchez on a liner to right.  Aubrey Huff then singled past a diving Ryan Howard, guarding the line as part of some "no doubles defense."  Buster Posey followed up with an opposite field single, sending Huff to third with one out.  Juan Uribe then hit a sacrifice fly to left, and the Giants walked it off.

It's not over.  They still have Roy Halladay, Roy Oswalt, and Cole Hamels pitching on full rest (minus Oswalt, sort of).  This can be won.  It's just a real longshot now. 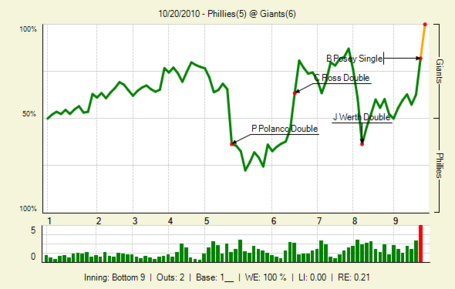