Back to the Silly-del: Phillies 4, Giants 2

Share All sharing options for: Back to the Silly-del: Phillies 4, Giants 2

I was really really really hoping this wouldn't have to be the final recap of the 2010 season when I volunteered to do it before the game. Thanks to a performance by Ace of Spades Roy Halladay that can best be described as "gutsy" and just enough offense to scrape by, it isn't.

It was apparent from the first batter that Roy faced that he didn't have his best stuff tonight. A leadoff walk and a single quickly put runners on the corner with no outs against Doc in the bottom of the first. Aubrey Huff lined to first base for the first out, but Chase Utley muffed a weak groundball off the bat of Buster Posey, failing to record the double play and allowing the run to score. Then, in the second inning, according to Charlie Manuel, Halladay suffered a groin injury. No matter, Roy was able to pitch through the pain for six innings only allowing one more run to score over that span.

This is not to say that he didn't encounter trouble -- as he didn't appear to have great command of any of his pitches and his fastball was sitting between 87 and 90 mph for most of the night -- but when he did encounter trouble, he was able to work his way out of it (with some help from his defense). For instance, in the bottom of the fourth, the Giants scored their second and final run on back-to-back one out doubles by Pat Burrell and the ever-loathsome Cody Ross, but when Ross tried to move to third on a Pablo Sandoval flyball to right he was gunned down on an absolutely perfect throw by Jayson Werth, ending the inning without further incident. Roy ran into some trouble again in the following two innings, putting runners on first and third with two outs and first and second with two outs respectively, but was able to get the last out in each case. He was done after 108 pitches and six innings -- short by Roy's standards -- but the injury factor really makes this start all the more incredible.

Meanwhile, Lincecum didn't appear to have his best stuff tonight either, but that didn't stop the Phillies' bats from starting off quietly yet again. It took a truly strange turn of events in the top of the third inning for them to finally break through. Ibanez started the inning with a single to center and Ruiz was then hit by a pitch to put runners at first and second with no outs. Doc then laid down a bunt that rolled just a few inches and appeared to be foul but was called fair. Posey fielded the bunt and threw to third, but Sandoval, who was playing in on the grass, could not find the bag and Ibanez was safe. Roy, however, thinking the bunt was foul and perhaps not wanting to further injure his groin, did not even leave the batters box, allowing Sandoval to recover and throw to first to get the out. With runners at second and third, Victorino slapped a fairly hard-hit grounder to first base that was booted by Huff all the way into shallow centerfield, plating two runs. Polanco followed with a single to score Victorino and put the Phillies up 3-1. And that would prove to be all they needed. The Phils would threaten against Lincecum again in the top of the seventh, but a deflating double play lineout to first off the bat of pinch hitter Ross Gload quickly put the kibosh on that. Lincecum's final line: 7 IP, 4 H, 3 R, 2 ER, 1 BB, 1 HBP, 7 K.

The Phillies bullpen was the other big story of this game. After making a cholera bed of the AT&T Park mound last night, the Phillies' relievers held the Giants in check for three nonetheless tension-filled innings. The dependable Jose Contreras and less dependable JC Romero were able to work around a one out single in the bottom of the seventh with the help of a leaping snowcone grab by Chase Utley to snag a soft liner by Aubrey Huff. Ryan Madson wont be credited with a save for his work in the bottom of the 8th, but he really should be. Facing the meat of the Giants' order in Posey, Burrell, and Ross, Madson struck out the side on just 13 pitches. He just simply overpowered them. In the top of the ninth, Jayson Werth launched a long opposite-field home run -- the first and last home run in AT&T Park for either team this series -- to give the Phillies an insurance run that wasn't needed, but sure made a lot of fans feel a lot better with the Brad Lidge experience imminent. Of course, Brad Lidge needed just ten pitches to work a 1,2,3 inning, and the Phillies had managed to send the series back home.

With Roy Oswalt and (hopefully) Cole Hamels set to face off at CBP against Jonathan Sanchez and Matt Cain, Phillies fans have to be feeling a little bit better about the team's chances. Make no mistake about it, they are still facing an uphill battle. But now that they've brought the series home, let's see if they can pull off the improbable. 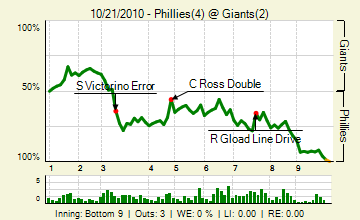